Using a river wave to prepare for the Ocean

Surfing in Quebec comes with the certainty that we’ll one day escape the city and surf in the Ocean. We’ll plan, travel and meet people who don’t understand how a Canadian started surfing. A lot of times during my travels, I had to describe how river surfing prepared me for the Ocean. When people see that I surf with a bit of ease (well, that’s what I like to think), I always get the classic question: “But isn’t Montreal far from the Ocean?”

Yes, indeed. However, we still have one of the largest rivers in the world and it happens to have enough waves for us to understand how a surfboard works. Let’s have a look at why it’s useful to river surf in order to progress faster in the Ocean.

A big surprise that surfers usually have is that most of the techniques learned in the Ocean are useless in the river. There’s no break to pass, neither is there any set waves and the wave is waiting for us, not the contrary. If an Ocean wave will break and have an existence of only a few seconds, the river wave is always there. In fact, the best way to describe a river wave for the person who has never seen one is to compare it to a treadmill: we stay at the same place while the ground moves. As the wave is waiting for us, we just have to make the effort to learn how to catch it. This may disappoint the average ocean surfer as he’ll have to learn everything again.

So where are the good news with all of this? Most of the experience we get in the river will be useful in the Ocean! Now, if this sounds interesting, one has to invest some time to learn.

Therefore, it’s common to see surfers with a lot of river experience performing well in ocean waves, a fact that can be explained easily if we look at how they learned surfing. The river teaches us how to swim efficiently and how to adopt the perfect position on our board. If we adopt a bad body position in the river, chances are high that we miss the wave, which gives us the extra motivation to learn quickly. Also, it’s possible to spend more time on a single river wave than in an entire session in the Ocean. If your average ocean wave is lasting 15 seconds, this means that you have to surf 20 consecutive waves in order to spend 5 minutes surfing – something that can be done easily on only one river wave. The river will then give us a huge potential to practice our turns, our position and hardest maneuvers. Afterall, as the wave doesn’t change, we can fully concentrate on improving our skills. 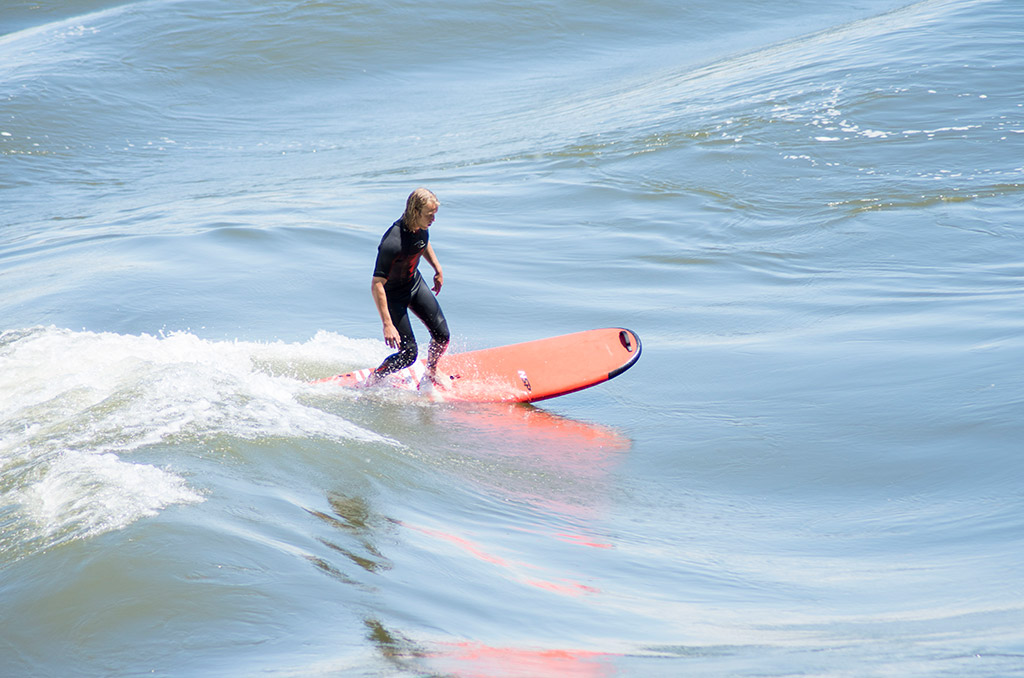 Waiting to go to Australia, Nicolas Lauzier is having a sesh at Habitat 67. Picture by François Boudrias

When we arrive in the ocean, our body is already used to be swimming on a surfboard. Our balance is instinctive and our arms are ready for some paddling activity. We know how to read water and taking a wave can be done easily as we’re being helped by the propel effect that we don’t have in the river. Staying in the curl (the breaking point of the wave) is also a familiar activity for us as we have to that at all times in the river. There’s a rip tide? No problems, we have seen that already! The only thing left to do is to learn exactly how to read the ocean, follow the etiquette of the most crowded beaches and of course, observe the locals to learn quickly.

If you’re starting to surf and you live not so far from a river wave, I suggest you give it a try in order to learn how to surf. If you’re dedicated and you invest enough time, your precious travel moments will benefit a lot from your efforts. Having learned a lot in the river, it will be your job to answer to curious locals who want to know why is a surfer from Montreal having so much style in the water. Pretty sure you won’t dislike that!

Seen from above, there’s almost no difference between a river wave and an ocean wave. Picture by Alex Caron-Goudreau